This is an annual post reviewing the last year and making resolutions and predictions for next year. This year’s edition features sleep tracking, intermittent fasting, overcommitment busting, and evaluating calibration for all annual predictions since 2014. 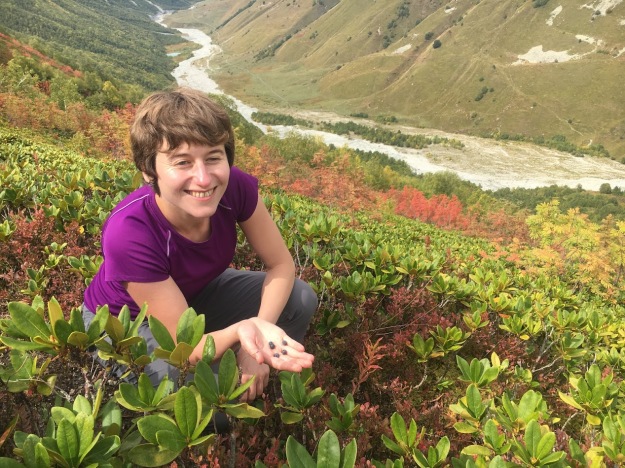 Calibration over all annual reviews: 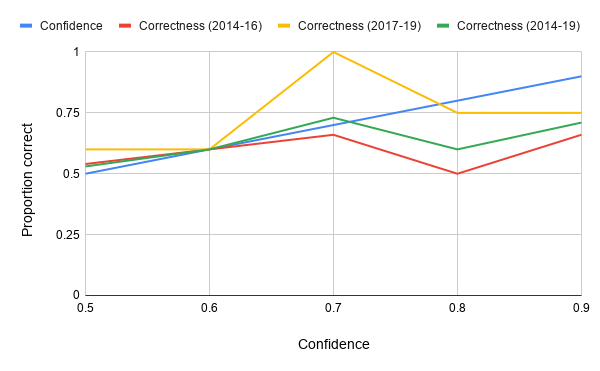 My post about the specification gaming list was recently nominated for the LessWrong 2018 Review (sort of like a test of time award), which prompted me to write a retrospective (cross-posted here).

I’ve been pleasantly surprised by how much this resource has caught on in terms of people using it and referring to it (definitely more than I expected when I made it). There were 30 examples on the list when was posted in April 2018, and 20 new examples have been contributed through the form since then.  I think the list has several properties that contributed to wide adoption: it’s fun, standardized, up-to-date, comprehensive, and collaborative.

Some of the appeal is that it’s fun to read about AI cheating at tasks in unexpected ways (I’ve seen a lot of people post on Twitter about their favorite examples from the list). The standardized spreadsheet format seems easier to refer to as well. I think the crowdsourcing aspect is also helpful – this helps keep it current and comprehensive, and people can feel some ownership of the list since can personally contribute to it. My overall takeaway from this is that safety outreach tools are more likely to be impactful if they are fun and easy for people to engage with.

This list had a surprising amount of impact relative to how little work it took me to put it together and maintain it. The hard work of finding and summarizing the examples was done by the people putting together the lists that the master list draws on (Gwern, Lehman, Olsson, Irpan, and others), as well as the people who submit examples through the form. What I do is put them together in a common format and clarify and/or shorten some of the summaries. I also curate the examples to determine whether they fit the definition of specification gaming (as opposed to simply a surprising behavior or solution). Overall, I’ve probably spent around 10 hours so far on creating and maintaining the list, which is not very much. This makes me wonder if there is other low hanging fruit in the safety resources space that we haven’t picked yet.

I have been using it both as an outreach and research tool. On the outreach side, the resource has been helpful for making the argument that safety problems are hard and need general solutions, by making it salient just in how many ways things could go wrong. When presented with an individual example of specification gaming, people often have a default reaction of “well, you can just close the loophole like this”. It’s easier to see that this approach does not scale when presented with 50 examples of gaming behaviors. Any given loophole can seem obvious in hindsight, but 50 loopholes are much less so. I’ve found this useful for communicating a sense of the difficulty and importance of Goodhart’s Law.

On the research side, the examples have been helpful for trying to clarify the distinction between reward gaming and tampering problems. Reward gaming happens when the reward function is designed incorrectly (so the agent is gaming the design specification), while reward tampering happens when the reward function is implemented incorrectly or embedded in the environment (and so can be thought of as gaming the implementation specification). The boat race example is reward gaming, since the score function was defined incorrectly, while the Qbert agent finding a bug that makes the platforms blink and gives the agent millions of points is reward tampering. We don’t currently have any real examples of the agent gaining control of the reward channel (probably because the action spaces of present-day agents are too limited), which seems qualitatively different from the numerous examples of agents exploiting implementation bugs.

I’m curious what people find the list useful for – as a safety outreach tool, a research tool or intuition pump, or something else? I’d also be interested in suggestions for improving the list (formatting, categorizing, etc). Thanks everyone who has contributed to the resource so far!

(Coauthored with Ramana Kumar and cross-posted from the Alignment Forum.)

There are a few different classifications of safety problems, including the Specification, Robustness and Assurance (SRA) taxonomy and the Goodhart’s Law taxonomy. In SRA, the specification category is about defining the purpose of the system, i.e. specifying its incentives.  Since incentive problems can be seen as manifestations of Goodhart’s Law, we explore how the specification category of the SRA taxonomy maps to the Goodhart taxonomy. The mapping is an attempt to integrate different breakdowns of the safety problem space into a coherent whole. We hope that a consistent classification of current safety problems will help develop solutions that are effective for entire classes of problems, including future problems that have not yet been identified.

In the Goodhart taxonomy, there is a variable U* representing the true objective, and a variable U representing the proxy for the objective (e.g. a reward function). The taxonomy identifies four types of Goodhart effects: regressional (maximizing U also selects for the difference between U and U*), extremal (maximizing U takes the agent outside the region where U and U* are correlated), causal (the agent intervenes to maximize U in a way that does not affect U*), and adversarial (the agent has a different goal W and exploits the proxy U to maximize W). 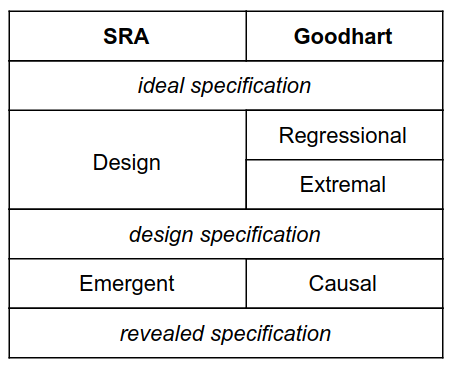 END_OF_DOCUMENT_TOKEN_TO_BE_REPLACED

This year the ICLR conference hosted topic-based workshops for the first time (as opposed to a single track for workshop papers), and I co-organized the Safe ML workshop. One of the main goals was to bring together near and long term safety research communities. 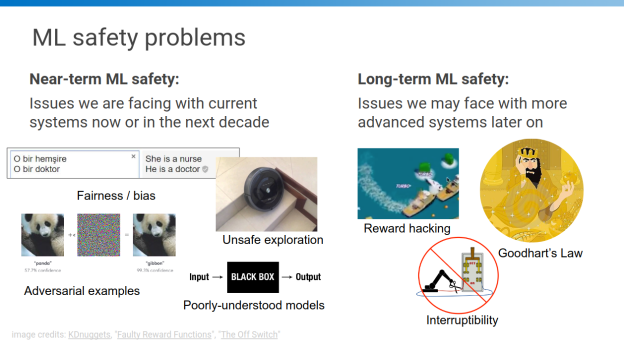 The workshop was structured according to a taxonomy that incorporates both near and long term safety research into three areas – specification, robustness and assurance.

We had an invited talk and a contributed talk in each of the three areas.

END_OF_DOCUMENT_TOKEN_TO_BE_REPLACED

At this year’s EA Global London conference, Jan Leike and I ran a discussion session on the machine learning approach to AI safety. We explored some of the assumptions and considerations that come up as we reflect on different research agendas. Slides for the discussion can be found here.

The discussion focused on two topics. The first topic examined assumptions made by the ML safety approach as a whole, based on the blog post Conceptual issues in AI safety: the paradigmatic gap. The second topic zoomed into specification problems, which both of us work on, and compared our approaches to these problems.

END_OF_DOCUMENT_TOKEN_TO_BE_REPLACED

A major challenge in AI safety is reliably specifying human preferences to AI systems. An incorrect or incomplete specification of the objective can result in undesirable behavior like specification gaming or causing negative side effects. There are various ways to make the notion of a “side effect” more precise – I think of it as a disruption of the agent’s environment that is unnecessary for achieving its objective. For example, if a robot is carrying boxes and bumps into a vase in its path, breaking the vase is a side effect, because the robot could have easily gone around the vase. On the other hand, a cooking robot that’s making an omelette has to break some eggs, so breaking eggs is not a side effect.

How can we measure side effects in a general way that’s not tailored to particular environments or tasks, and incentivize the agent to avoid them? This is the central question of our latest paper.